The last time I was in the Honolulu Hale courtyard a few months ago, there were Christmas trees decorated in anime themes.

Now? There’s a strip show. No, not that kind of strip show, ya pervs; it’s “The Strip Show: A Celebration of Cartoon and Comic Art,” an exhibit dedicated to local cartooning, with sections showcasing the work of Comic Jam Hawaii, MangaBento and late cartoonist Dave Thorne. And it’s on display now through next Wednesday. 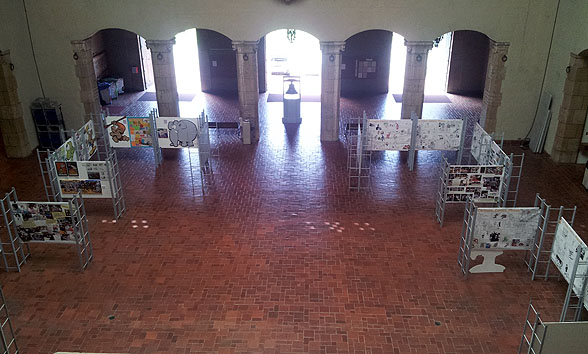 Comic Jam Hawaii coordinator Michael Cannon shared the origins of the exhibit with the group:

When Dave Thorne passed away, the idea was floated to do an exhibit dedicated to him. Leiji (Harlock, one of the group’s members) contacted Scott Goto to see what could be done. Unfortunately city policy prevented us from being able to do an exhibit for a single person. I spoke more with Scott and found that if we did it as a group then we could have a section of the exhibit dedicated to Dave. We had to come up with some sort of theme, so it’s essentially a celebration of cartoon, comic, and manga art with the added tribute to Dave.

There are 32 panels in the exhibit to look at — 16 dedicated to Comic Jam Hawaii, eight each for Dave Thorne’s work and Mangabento. The courtyard is open during normal business hours, weekdays from 8 a.m. to 4:30 p.m., and it’s definitely worth checking out. For those of you who can’t visit before next Wednesday, there are a bunch of pictures of the panels and behind-the-scenes setup work at www.facebook.com/media/set/?set=oa.548422995255374&type=1 (Facebook login required).

I also took some pictures of the exhibit and the opening reception Tuesday evening. This particular gallery also marks a bit of a testing ground for Otaku Ohana — the powers that be recently upgraded our blogging infrastructure to enable embedded photo galleries, so I thought I’d give it a spin here for the first time. Click twice to get the full-sized image — once to get the thumbnail, then a second time for the larger picture. Like it? Prefer I’d go back to embedding Flickr galleries? Let me know in comments.

(Update 3/5, 10:45 p.m.: Scott Shinsato of Comic Jam Hawaii posted a full video of the speeches made at the opening reception, most of which I missed. D’oh! You can see the video — no Facebook login necessary! — here.)