Hi! You’ve reached the desk of Jason S. Yadao, anime/manga/cartooning blogger for the Honolulu Star-Advertiser. Jason is currently away wrapping his head around the scholarly treatise that is Pink Globalization: Hello Kitty’s Trek Across the Pacific, the book by UH-Manoa anthropology department chairwoman Christine R. Yano due out from Duke University Press this April, and is not able to produce a formal Cel Shaded Report at this time. (Nor will he be able to produce an entry for this month’s Manga Movable Feast on the works of Moyoco Anno, for that matter, although he would certainly encourage you to go check it out.)

In lieu of a formal Cel Shaded Report, Jason would like to highlight the work of someone else who’s on a hiatus of sorts: Audra Furuichi, who’s taking a month-long break from drawing cute plush pup online comic nemu*nemu to regroup and is instead composing lovely 4×6 watercolors of whatever catches her fancy and posting them to the site, whether it be classic characters like Red Riding Hood … 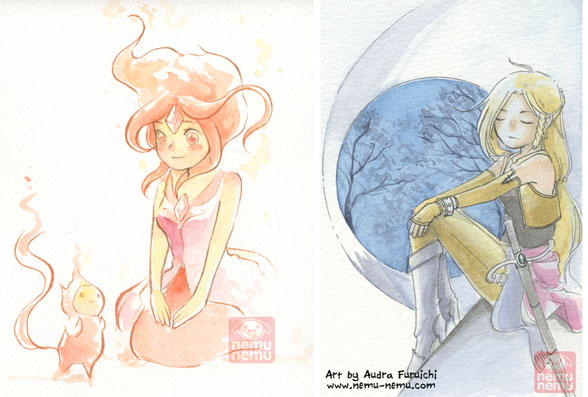 … or her own characters like Mayer and Mackenzie from Pizza Hero, from the Henshin Rider/Yellow Jacket story arc.

All of these originals — and more! — are available for sale at the Nemu Shop, where Audra’s using the proceeds to pay for her lone out-of-state nemu*nemu trip for this year, the Toronto Comic Arts Festival in May. New pieces are being added regularly (and prices were recently cut on what’s been posted, too!) so Jason encourages you to check it out.

After all of that, if you would still like to leave a message, please do so at the beep. However, it is recommended that you not make any references to certain footwear, headphones, designer handbags, music players and/or pharmaceutical aids, as they will be marked as “spam” and disposed of accordingly.

The great calendar of otakudom

Otaku Fair at Shirokiya: Hosted by Hakubundo Bookstore with volunteers from the University of Hawaii at Manoa Anime Manga Society. Pick up art books, Japanese-language manga, posters and assorted character goods. Through Sunday.

MangaBento: This group of anime- and manga-inspired artists usually meets every second and fourth Sunday of the month at the Academy Art Center, 1111 Victoria St., Room 200. Visit www.manga-bento.com. Next meeting: 1 to 4 p.m. Sunday.

Open Cosplay Shoot: Got a lovely costume that you want to show off and want to capture it on film … err, pixels? (The digital era: changing the way we think about things since time immemorial.) Come on out to the first large-scale open cosplay shoot of the year at the Aiea Loop Trail. Cosplayers and photographers, meet at the first restroom at the head of the trail, and go from there. Happy cosplaying/shooting! 10 a.m. to 4 p.m. Feb. 2.