And now, here’s my summary of Kawaii Kon 2012, as told by one file folder on my computer: 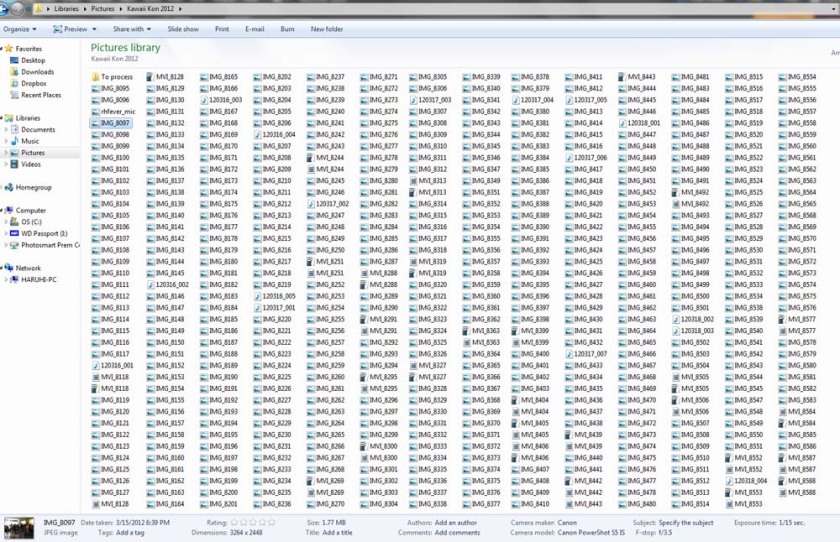 … yeeeeeaaaaah. Those files are going to take a while to sort through. More reports will have to wait for a future date, though, because there’s so much to cover in the short term — news on Kawaii Kon 2013, highlights from the Hawaii International Film Festival Spring Showcase schedule (Ace Attorney, yaaaaaay), this month’s Manga Movable Feast on the works of Jiro Taniguchi.

Then there’s the latest news coming out of the Hawaii Entertainment Expo (HEXXP) camp. The convention, which already made a splash earlier this month by announcing Final Fantasy series composer Nobuo Uematsu and his band, the Earthbound Papas, as a guest of honor for this year’s event, recently pulled off another coup, landing a preliminary round for the World Cosplay Summit in 2013. To make things official, here’s an introductory video from WCS-USA organizer Laura Butler and assistant organizer Lynleigh Sato:

… as well as a link to a second Hawaii-themed video that they made.

The annual World Cosplay Summit is a big deal. Think of it as being like your typical anime convention cosplay showcase or masquerade, except with a bazillion times more prestige and featuring only the absolute best of the best cosplayers from around the world. The event began in 2003 with five cosplayers representing three countries (Italy, Germany and France); this year, 16 countries are listed as participants. Ever since a competition was established in 2005, though, the United States has won the same number of world championships as the Chicago Cubs have in 103 years: Zero. (Brazil’s won three times, Italy twice, and France and Japan have one title apiece.)

The winner of the Honolulu competition will move on to the U.S. finals at Katsucon in the Washington, D.C. metro area next February, and the winner from that will head out to Nagoya, Japan to represent the ol’ stars ‘n’ stripes at the summit. Suffice it to say it’ll take more than a set of Pikachu pajamas to win this competition. You may want to get started on that competition-grade costume, umm, now.

HEXXP will take place Oct. 20-21 at the Aloha Tower Marketplace; for more information or to register, visit www.hexxp.com. Also, a side note on registration: There are now monthly prize drawings for those who have already preregistered for a two-day pass. This month’s prizes are a gift certificate for a two-hour session at Karaoke GS Studio and a $40 gift certificate for Minato Japanese Restaurant. Also, there are 12 of the $100 VIP passes remaining, so if you’re interested, you’ll want to jump on that soon.

One thought on “World Cosplay Summit road goes through HEXXP”