Previously at Kawaii Kon, I wrote this:

Of course, I’m not sure if Jake the Dog and Finn the Human will show up — the preceding few sentences having been a riff on the Adventure Time theme, for those of you not familiar with the show — but who knows, that show is pretty popular, so cosplayers dressing up at those characters may be a virtual lock.

And sure enough, not 30 minutes into my day, these fine cosplayers showed up.

A Finn with Jake (in his pocket), and a Princess Bubblegum to boot? That’s it, I’ve seen all I needed to see this year, my job’s done, see y’all at Kawaii Kon 2014.

That’s right. Crunchyroll and its representative, senior brand manager Keith Kawamura, broke the news that Sparrow’s Hotel, with a Japanese premiere date and a cast announced five days ago, would be making its way to the streaming anime site. 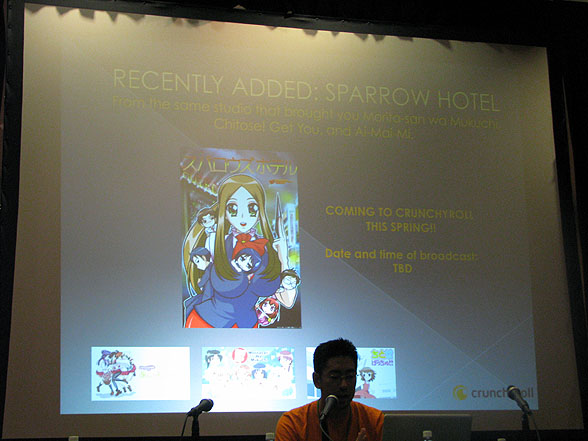 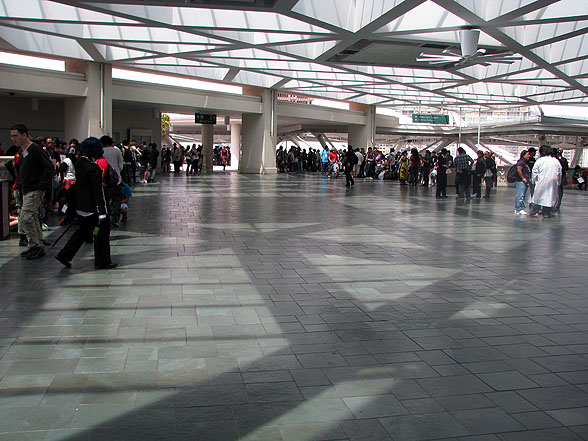 That’s already a lot of people wanting to get into one or the other. Factor in where the end of the line was, though …

… yeeeeeeaaaaaah. It would take 15 minutes after the doors opened to get everyone into the room, with staffers checking that badges had those new anti-counterfeiting stickers. 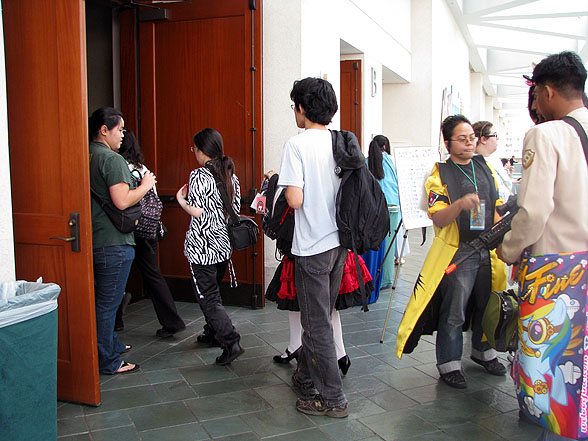 Pretty packed house, too. Certainly more full than I’ve ever seen opening ceremonies. Consider, too, that this wasn’t even everyone at the convention at the time — Dealers Room line, remember? — and you could say that there are quite a lot of people here this year. And this is only Friday’s crowd! 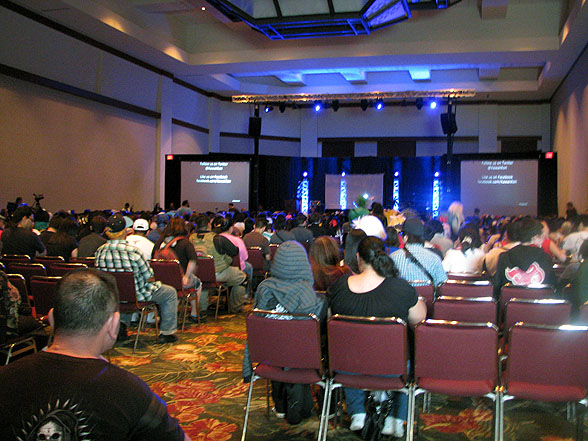 After the customary opening video (which will not be shown here because I don’t feel like dealing with copyright claims) and a performance by a Hatsune Miku hologram (which also won’t be shown here because (a) that’s super-tricky to photograph and (b) any photos or videos would never do the real thing justice anyway, because it’s one of those things that just has to be seen in person), the parade of guests began.

And that’s where one of the dominating themes of opening ceremonies — and the title of this post — entered into play. Flash back to last year’s opening ceremonies and the corresponding post, in which I dubbed that year “The Year of the Cat” because of voice actor Lisa Ortiz’s introduction of a plush kitten to beat up during the convention. This year’s trend came courtesy of Lisle Wilkerson, voice of Nina Williams and Christie Monteiro in the Tekken franchise and this year’s translator for the Japanese guests.

Wilkerson told the audience that she was going to teach them how the Japanese usually scream. “I would like for you to use it when we introduce all our guests,” she said. “So this is how you scream: ‘KYAAAAAAAAH~!'”

And so it went. Voice actor Toshio Furukawa? KYAAAAAAAAH~! 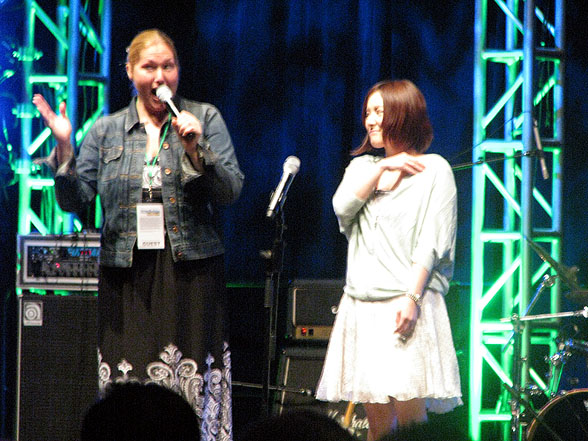 Vocaloid DJ hachioji-P and professor Toshihiro Fukuoka? … you get the idea.

Worth noting with Ito: She had with her one of this year’s official Kawaii Kon T-shirts with an image she designed, with all of the guests’ signatures on it.

And one lucky audience member won it, and she got to hug Ito in the process.

The KYAAAAAAAAH~!ing didn’t carry over to the guests from the mainland, but the swag giveaways certainly continued. Here are your hosts for part of these proceedings, voice actors Todd Haberkorn and Colleen Clinkenbeard.

Here are two audience members begging like little doggies in front of Haberkorn to get some stuff.

And yet the masses wanted more. 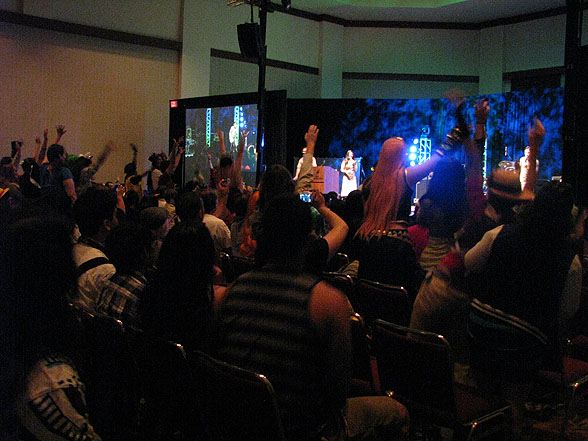 Here’s Haberkorn actually receiving something in return from someone about to get stuff: a … plush crab. Yeah, I don’t exactly get the connection, either. But hey. Free crab. One that’s neither giant nor enemy nor requires the attacking of a weak point for massive damage.

And then, of course, there was Johnny Yong Bosch and Eyeshine. Hugely popular. 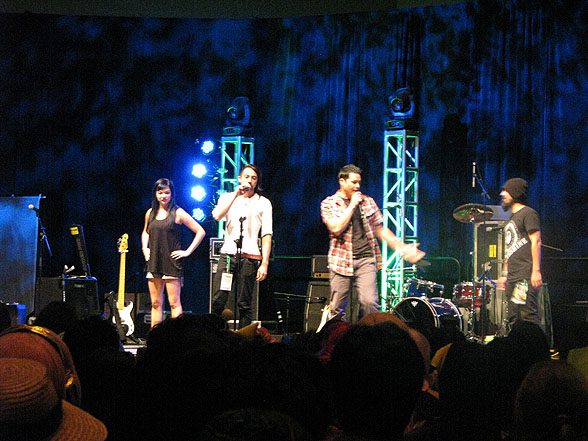 The masses, naturally, clamored for the stuff that they were giving away, too.

I understand Eyeshine played a mini-set to close out opening ceremonies. I’d already moved on, though. Far too much else to see and do. A whole bunch of con-tent, you could say.