This post has been in the works for a little over a year now.

It’s funny sometimes how the universe works. The first saved draft recorded in the system has the time-stamp “24 July, 2012 @ 21:31.” Worked on it for a few days, got busy, dropped it. I picked it up again on Sept. 9 before Mini Con at McCully-Moiliili Library, then got busy and dropped it again.

The first time stamp on this latest revival of this post? “24 July, 2013 @ 18:25.” Almost exactly a year to the day that I began trying to write it. I swear I never planned it this way — I just wanted to have something to contribute to the discussion as members of the local and global cartooning community prepare for a celebration of Dave Thorne’s life on Saturday. (If you’d like to come pay your respects and join in the celebration, it’ll be from 9:30 a.m. to 2 p.m. at Bay View Golf Park, 45-285 Kaneohe Bay Drive, with visitation from 9:30 to 10:30 a.m. and a short service at 10:30 a.m.) It’s just been a matter of finding the right words and digging out the best pictures that’s taken this long.

It’s hard to believe it’s already been that long since Dave died — July 22, 2012, to be exact, at the age of 82. I only knew him personally for the last year and a half of that time; of that, I only spoke to him in person on four different days, all of them in 2011. You don’t need a calculator to figure out that my time spent with him was a very small sliver of his life in the grand scheme of things. It was only during his hospitalization that I began learning that he was so much more than the man who drew “Thorney’s Zoo” for our paper, that his sphere of influence expanded to encompass not only local cartoonists like Audra Furuichi, Jon Murakami and Dave Swann and isle ex-pats like Deb Aoki and Stan Sakai, but also artists around the world — Phil Yeh and Greg Evans are the ones that immediately pop to mind, although I’m sure there are many others. Mark Evanier — whose work with Groo the Wanderer I’ve absolutely adored since high school, by the way — blogged about Dave’s death. Scott Shaw wrote a remembrance piece that appeared in the program book this year at Comic-Con International in San Diego. If you’re on Facebook, I’d highly recommend checking out the Dave Thorne Tribute Page … you could spend hours browsing that seeing how much of an impact he made on people’s lives.

And, of course, he did a lot of work over the years. This mini-exhibit at a drawing workshop he hosted at McCully-Moiliili Library shows as much. 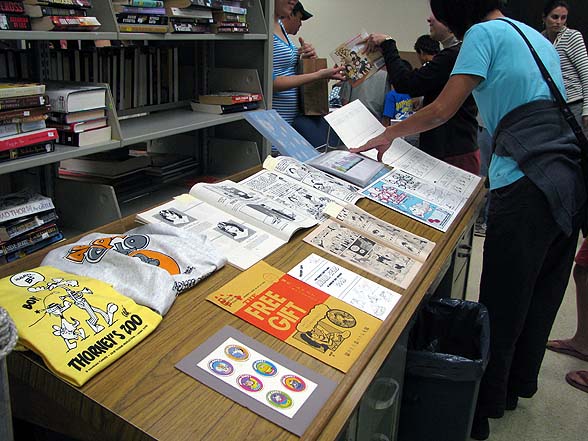 Yet from the first time I met him, at the Kahala cartoon art mural jam in March 2011, it was like I knew him for forever. Warm greeting. Firm handshake. And, of course, drawing. Always drawing, always eager to share with others the joy of drawing.

You can see a bunch of pictures from that original post, but here are a pair that I haven’t published until now. The first is a section of the mural that showcases his distinct art style (including an elephant — he always did love drawing elephants, as you’ll see in another picture in part 2). 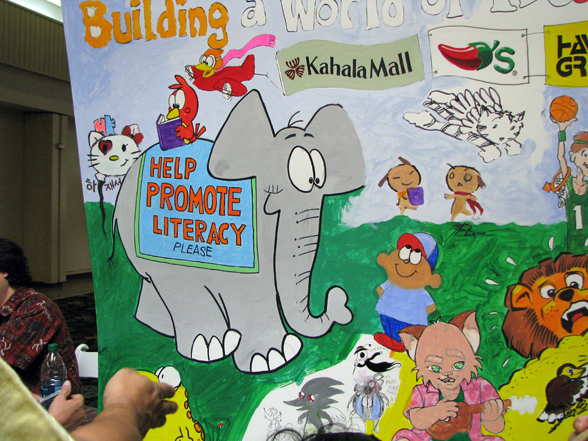 And the second is of him signing the mural under the elephant’s foot.

After that first meeting, I emailed him a link to the Star-Advertiser “Thorney’s Zoo” archive. (You can find it here: www.staradvertiser.com/features/sundaycomics/thorneyszoo/). A few days later, I got this reply:

Thanks again for your kokua in looking up and sending me the list of Thorney’s Zoo’s websites from the beginning of the paper merger.  I really appreciate it.  VERY MUCH!

If you ever have the time to research the list from the beginning of my Zoo at the Star Bulletin (April 22, 2007), I would be incredibly grateful.

Jason, I was sure I’d written an acknowledgement earlier, but in checking back just now, I see that it didn’t happen.  I apologize profusely for that oversight.  It most likely was because I was so totally wiped out from all the activity that weekend and have done very little with the computer since then.  I’m not 23 anymore and am starting to really feel my age.  In fact, I’m still recovering from that busy weekend.

It was a pleasure to finally meet you, Jason.  I see your picture and column in the paper every time, and I finally got to meet the celebrity in person.  I’m sure you are making a lot of people who have an interest in manga, very happy.  What a fine thing that is to do.

I hope you are having a joyous day.  Be well, do good things, and laugh as often as possible.

He always “signed” his emails with that “/” symbol at the end, like two hands clasped in prayer. It was a carryover from what he’d do in real life when he greeted people — he’d fold his hands and give a little bow. I thought it was pretty neat, the way he’d show humility to everyone like that (when in reality, it really should’ve been us bowing to him in appreciation of all he’d ever done).

(I did dig up more of his cartoons online and send him those links, by the way. More on that in Part 2.)

But back to his eagerness to share the joy of drawing. He certainly had a wealth of information to share. Which brings us to the second time I saw him — at an “Art of Cartooning” presentation, one of several he did in April 2011 at libraries on Hawaii island and Oahu. This particular one was at McCully-Moiliili Library, and that happened to be the same presentation where I shot this video. Here’s another video clip that I shot during that same presentation.

And here are some pictures that I shot during the presentation. Well, okay, here are a lot of pictures from his presentation. I had trouble figuring out which of these I wanted to use, each frame capturing one moment in his creative process, so I just ended up throwing pretty much all of them into the gallery.

I actually have the full audio from that presentation, too. Perhaps I’ll get around to transcribing that someday. I just remember being thoroughly captivated by the moment and enchanted by the stories he’d seamlessly weave into his lessons and the characters he drew.

Next time: Some pictures from my third and fourth encounters with Dave … along with the links I could find of the Star-Bulletin “Thorney’s Zoo” strips online.