It was a few minutes after midnight Saturday — and about eight hours or so before I’d head over the Koolaus for the Dave Thorne Celebration of Life — when I was going through pictures that I was about to burn on a CD for the Thorne family. Some of them have or will in a moment see the light of day here in Otaku Ohana; others, only I and they will ever see.

I thought I had pretty much wrapped up deciding which photo would go where … that is, until I came upon one particular sequence of shots from Mini Con at McCully-Moiliili Library on Sept. 10, 2011. Dave wasn’t a featured “guest,” but he showed up anyway and … well, here’s one of those shots that caught my attention.

Mini Con 2011 also happened to be the debut gathering for Pen & Ink Works, another anime- and manga-inspired artist collective. That’s group leader Brady Evans up front, leading a mini-workshop. And sitting in the front row? None other than Dave himself.

It’s proof that not only was he a man who was willing to share with others the joy of drawing, but also someone who was willing to learn from and support the educational endeavors of other artists. Such was his bond with the global cartooning community, really. I was talking with nemu*nemu artist Audra Furuichi about this at the Celebration of Life, and she mentioned that a few years ago, when she and Jon Murakami were doing summer talks at various public libraries around the state, Dave made it a point to visit.

Speaking of Audra, here’s one of my favorite pictures from the Mini Con collection. Dave had made his way over to the nemu*nemu booth, and Audra was showing him her book of original comic strip sketches. I have no idea what was being said at the time, but let’s face it, Dave had a way of making other people laugh. A lot.

Of course, he also hung around to talk art with some of the Pen & Ink Works artists.

A few weeks later, on Sept. 24, I saw him at another cartoon art mural jam session, this one at Windward Mall. He was relying more on his cane to walk by then, and he didn’t seem to me like he had as much energy as before … but of course, his passion to draw was still intact. 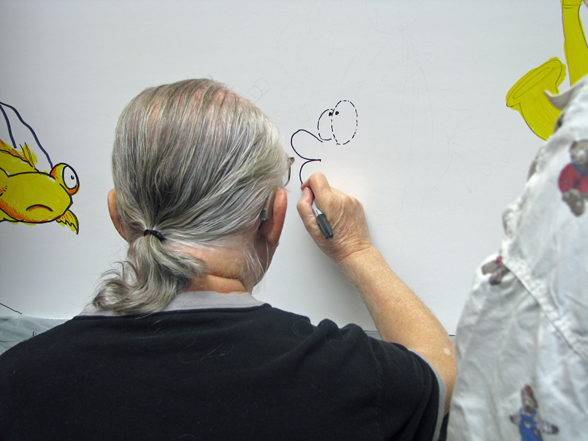 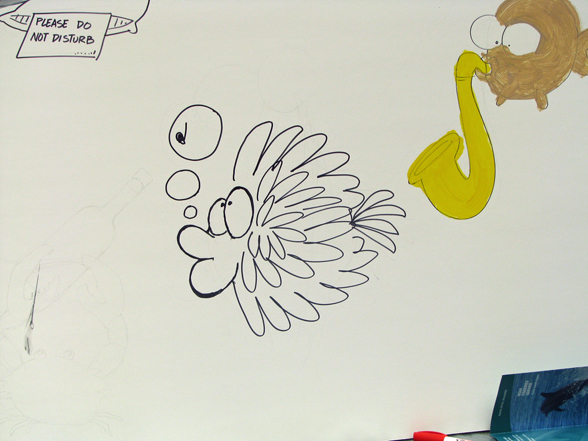 I didn’t realize it at the time, but that would be the last time I’d ever see him alive. Less than two months later, on Nov. 8, he was rushed into emergency surgery for a torn aorta, as detailed in this post; months of convalescing followed before he suffered a major stroke and died on July 22, 2012. Tag-team partner in fandom Wilma J. and I considered visiting him several times, but the timing never seemed quite right. I have a feeling I wouldn’t have been able to keep my composure if I had visited.

And so we come full circle back to the Celebration of Life, held Saturday at Bay View Golf Park. It was a lovely affair — a few hundred people showed up to pay their respects (with more who might have come if there was more parking in the immediate vicinity). Sons Mitchell and Randy offered some thoughts, and daughter Kelly Thorne-Paik sang a song. Alan Low recounted Dave’s life as Jon Murakami drew quick sketches, reminiscent of Dave’s “chalk talks” like the one he did at McCully-Moiliili Library featured in Part 1 of this post.

Going in to this event, I thought I’d just enjoy it for what it was, then, with my heart full, come home, finish up this post with the Mini Con and Windward mural pictures and notes, and call it a day. But the way the hall was decorated, with its giant cutouts of Dave’s characters and poster boards and assorted Dave-orabilia sitting on a table in the back, made my innate blogger senses tingle, and … well, let’s just say it’s a good thing smartphone cameras have evolved to where they are today, because here’s the entirely-shot-by-phone Celebration of Life Flickr gallery.

One final thought. In my card to the Thornes, I wrote, “Dave’s physical heart may have given out, but his spiritual HEART will live on in the cartoonists he touched forever.”

That’s quite a legacy, really.

Tracking down an online record of “Thorney’s Zoo” in the Star-Bulletin era can be rather tricky. An article by Burl Burlingame from April 22, 2007, talks about the “A-Team of local cartooning,” Jon and Dave, submitting strips beginning with that issue. It appears, though, that it wasn’t until Sept. 23 that year that the strips began to be posted online.

Unfortunately, a switch to a different computer system in September 2008, followed by another switch when the Advertiser and Star-Bulletin merged in 2010, resulted in all the strips between Sept. 21, 2008, and June 2010 being wiped off the Internet. I think they still exist in microfilm form, so if anyone ever feels like scanning through all those issues at the state library, feel free to do so. Still, what remains of the digital record is pretty neat. And here, published in one place for what may be the first time, is that archive.

One thought on “Celebrating Dave Thorne: The “Zoo” keeper’s legacy (part 2 of 2)”