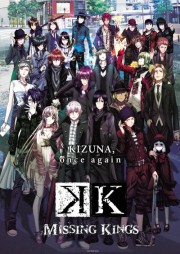 The 2012 anime series K was one of those series that went completely under my radar. Seriously, if there was any chatter about it on my social media networks amid all the talk about Sword Art Online, Free!, Attack on Titan, Kill la Kill and a whoooooole bunch of other series, I missed it. It was only this morning that I learned that K streamed on Viz’s Neon Alley online service, it was a 12-episode series, and it sounds like one of those “innocent average bystander-type person gets sucked into a wide-ranging conspiracy that involves a murder, his uncanny resemblance to someone tied to that murder, and oh yeah, there’s some entity behind the scenes manipulating everything, too” shows.

The movie that continues the story, K: Missing Kings, opened in theaters in Japan last week. And now, since we’re living in the age of instantaneous digital subtitling, we’re getting it courtesy of Eleven Arts at the usual theaters: the Ward Stadium complex on Oahu and the Kaahumanu 6 theaters in Kahului. Here, have a trailer.

And here’s the official description:

Based on the hit anime K, K MISSING KINGS picks up where the series left off. Featuring the same director and scriptwriter as the series, this movie brings the characters that you’ve grown to love in the same spirit of action, honor, and loyalty. K MISSING KINGS also sees the return of popular voice actors such as Daisuke Namikawa, Daisuke Ono, and Tomokazu Sugita, reprising their roles for the first time on the big screen.

The story starts some time after the Island Academy Incident, in which four of the seven great Kings crossed paths. Since this time, silver clansmen Kuroh Yatogami and Neko have been searching for their master, Yashiro Isana, the Silver King. Their search having turned up fruitless, the two begin to give up hope, until they encounter Anna Kushina and Rikio Kamamoto, two members of the red clan HOMRA being chased by someone.

Showtimes at both theaters are at noon Saturday and 7 p.m. Monday. Can’t make those screenings? The Doris Duke Theater at the Honolulu Museum of Art will be showing it in October. Exact dates will be announced down the line.

Get Pop-Cultured at Barnes & Noble:  With this month bookended by Anime Expo in Los Angeles at the beginning of it and Comic-Con International in San Diego toward the end, it’s pretty safe to say that this month is a pop-culture paradise. It’s probably with that in mind that Barnes & Noble created their “Get Pop-Cultured” celebration, kicking off nationwide today and running through Aug. 10.

So it was a given that the last of the big-chain bookstores on Oahu would be taking part as well. And that store, in Ala Moana near the Satellite City Hall and a freshly opened Jack in the Box, is jumping in in a big way starting Saturday, with an appearance by Gordon Rider/Star-Advertiser “Calabash” cartoonist Jon Murakami at 11 a.m. and Kawaii Kon hosting a Cosplay Runway event at 2 p.m. Cosplayers, show up in costume on Saturday and get a coupon for a discount at the in-store cafe as well. Other events are planned through Aug. 10; I’ll write about those next week when I have more time to do so.

Taku Taku Matsuri WATER GUN FIGHT!!!!: Bring your water guns and some food for a potluck and come on down for a fun day at the beach. Also featuring tryouts for the Taku Taku Matsuri Summer Festival Talent Show and a mini Cardboard Brawl.  More details at the Facebook event page. Ala Moana Beach Park, 11 a.m.-4 p.m. Saturday.

Comic Jam Hawaii: This group of collaborative cartoon artists meets every first and third Sunday of the month at Pearlridge Center; locations within the mall may vary. Visit www.facebook.com/groups/ComicJamHawaii (Facebook login required). Next meeting: 1 to 4 p.m. Sunday, Downtown Pearlridge side, near the escalators to the theaters and food court.

Kyary Pamyu Pamyu at the Waikiki Shell: There are still tickets available, although you might want to bring a poncho, considering the forecast is for heavy rain from the remnants of Tropical Storm Wali. The concert starts at 5 p.m. Sunday; details in my last post.