Well, folks, we made it to the fireworks factory. Again. We’re standing here on Kawaii Kon Day 0, preregistration and dealer/Artist Alley load-in night, ready for another three-day weekend packed full of cosplay, entertainment, special guests from the animation industry and music world, panels, games and pretty much what you’d imagine otaku heaven to be like without actually moving to Japan itself. And there’s your annual look at the convention guide and your friendly neighborhood anime/manga blogger’s press credentials at right.

There’s a bit of a different feel to this year, though … and not just because registration ops has moved to the ground floor, next to the hall with the dealers room and Artist Alley. It’s because this year, Kawaii Kon isn’t just the big event on the local otaku community calendar, but the first event in a string of big events. As I mentioned in my post introducing Anime Matsuri Hawaii, it’s a remarkable time to be a local fan of anime, manga, science fiction and/or comics, with Hoku Kon (July), Amazing Hawaii Comic-Con (September) and Anime Matsuri Hawaii (November) all on deck on Oahu, and HawaiiCon (September) on Hawaii island. I mean, heck, Amazing Hawaii Comic-Con unveiled its first four guests — living legend Stan Lee and artists George Perez, Mark Kubert and Adam Bagley — on Wednesday, and the shares pretty much lit up my Facebook feed all day.

But the people still show up at Kawaii Kon. Ohhhhhh, do they ever show up. Here’s the sea of otakuness that descended on the convention for preregistration tonight, as seen from the escalators leading to/from the second-floor parking garage. 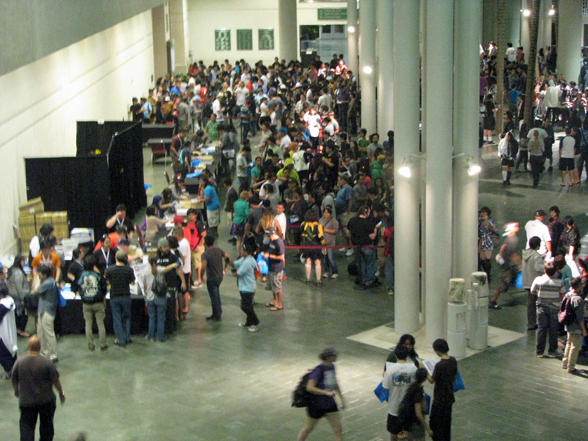 A final number will probably come at closing ceremonies as it has in previous years. By my estimates, though, there are about a bazillion people attending this year. Some of whom are even carting around replica basketball backboards.

Some last-minute notes as we head into this year’s event:

Time to rest up. See y’all tomorrow for Day 1. Feel free to follow me on Twitter and Instagram, too (both @jsyadao) for all my spur-of-the-moment updates over the weekend ahead. It’s gonna be crazy. But fun! But crazy.