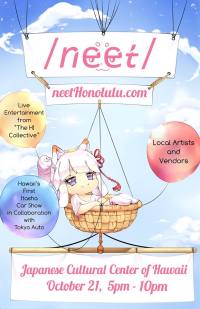 It doesn’t seem like it was that long ago that Taku Taku Matsuri was a part of the local otaku event scene, but it’s true: It’s been almost two years since the second event was held. A third edition was planned, but event organizer Yuka Nagaoka got sick and moved back to Japan for treatment last year, and it was put on indefinite hiatus.

Yuka’s still in Japan, and the chances of there ever being another Taku Taku Matsuri are remote at best. But it looks like we have a spiritual successor in place: NEET, a self-described “marketplace-focused event,” is taking place from 5 to 10 p.m. Friday at the Manoa Grand Ballroom, on the fifth floor of the Japanese Cultural Center. In the organizers’ own words:

We are a group of individuals dedicated to bringing quality vending opportunities to local Artists & Vendors.

We hope to offer a platform which encourages Artists & Vendors to pursue their aspiration in sustainable living through their craft.

The event name is based on the acronym used in the United Kingdom, Japan and several other regions to describe a young person, usually between the ages of 15 and 34, “Not in Education, Employment or Training.” But the event’s organizers are turning that meaning on its head. According to the event FAQ:

We chose this word because it’s a reflection of what we are. People who aren’t in school and taking a different route to accomplish our dreams of living off of our craft. We want people to not be afraid of taking risks for their dreams, and the first step is by being able to laugh about simple derogatory labels.

Also, they have a cute mascot. ‘Sup, Tomi. 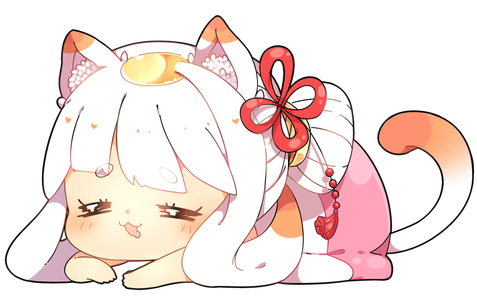 There will be more than 40 vendors there, from debuting greeting card seller Just Being Honest, to friends of the blog like Jon Murakami, HeadShot Heroes, Brady Evans and Michael Cannon under the Artildawn banner, to professional retailers like Hakubundo, Barnes & Noble and MiniQ. What I like about the lead-up to Friday’s event is how the NEET organizers have been taking some time daily on their Facebook page to profile one of the vendors that will be there. Check it out and find out about some vendors that you may not have known before. (I certainly learned a few things!)

Of course, you’re going to need some time to give your poor, screaming wallet a break. There will be food vendors on the first floor — Gyozilla and Bao Boys HI have been announced so far. There’s also going to be a cosplay contest at 7 p.m. — register at NeetCosplay@gmail.com with your name, age, email address and costume (and info on what show, game, or series it’s from) if that’s something you’re interested in –and entertainment from the HI Collective, all hosted by otaku emcee extraordinaire Remy Zane. If you’re into itasha, that subset of car culture where owners cover their cars in anime/manga/video game-themed vinyl stickers, there will also be a car show hosted by Tokyo Auto.

Admission (with in/out privileges) is $5; round up a group of five, and you can buy a five-pack of passes for $20. You can register online now at neethonolulu.com/pre-registration.html to save some time, too.

The Japanese Cultural Center of Hawaii is at 2454 S. Beretania St.; on-site parking is available for $6 with validation. For more information, visit neethonolulu.com. And of course, for all your upcoming event reminders, don’t forget about our ongoing Ota-cool Incoming calendar to the right, up top.

Before I sign off for today, a quick note: Thank you to everyone who’s followed the blog and liked our new Facebook page ever since we went independent! This is the first time we’ve been able to see our site metrics firsthand — I’m pretty sure they kept tabs over at the Star-Advertiser; I was just too shy to ask all these years — and while we may not be drawing in hundreds of hits per day, it’s nice to see that we have a dedicated core fanbase and some pretty influential readers in their own right. We’re humbled by your support and hope we can hold your interest for a good chunk of time to come.