Continuing from the last article (Jason’s note: Here’s a link to it, published close to a month ago … yikes, I’m sorry!  I’ve been a bad and terribly busy editor …): What do you do to survive in the economic climate of Post-Bubble Japan?  Everything your parents told you to do to be successful doesn’t work anymore.  Your job prospects are almost nil if you aren’t in the top 10 percentile of graduating students, and you now have a huge influx of hyper-capable women to add to the already huge competition pool.

Many post-bubble men lost their confidence in life after not making it in high school.  Others held onto belief and worked their way through the top colleges only to be greeted with rejection because they weren’t in the top 10 percent.  When faced with these seemingly impossible barriers, almost anyone would lose confidence and hope.  As a result, many young people began to retreat from the world.  Life’s struggles were too painful, and they were too ashamed of their failure after trying again and again and again.  How could they face their parents after failing so many times?

This phenomena is what created the image of the stereotypical otaku in Japan.  Young men (and women, too) would retreat into various hobbies and the Internet to cope with the struggles of life.  These otaku were people that were unable to fit the mold of the expected, mainstream Japanese male.  Unable to secure a steady office job or a relationship, many ended up surviving off working various temp jobs.  As for relationships, some would find love (watch the movie Densha Otoko) while others would retreat into the fantasy of anime and manga and forego the need to find a partner (i.e. Love Hina).

Seeing that society had already labeled them as irregular, the otaku sub-culture decided that instead of always worrying about what the rest of society thought, they would instead revel in their irregularity.  This mindset would help them forget about their societal struggles, and they linked up with other like-minded individuals in person or on the Internet, creating a safe environment where they could act freely.

However, the circumstances proved too great, and they retreated even further into themselves.  These people would end up becoming what are known as NEETs (Not in Education, Employment, or Training) and hikikomori (shut-ins).  NEETs were people who tried again and again to make it in the world, but the lack of opportunity and selective hiring practices of the companies proved too much, and they just gave up.  They end up staying home all day, every day, absorbed in their hobbies, trying to ignore the world.  A more extreme version of this is the hikikomori, or shut-in.  The individuals totally isolate themselves in their rooms, refusing to go outside.  Their spirits have truly been broken.

In recent years, it’s been thought that there are more than 1 million hikikomori in Japan, yet it is a problem that is rarely addressed.  Perhaps this is because of the Japanese cultural respect for privacy, as well as the social stigma and shame that comes with being related to a hikikomori.  However, it has been gaining more recognition in recent years, as the problem has remained strong despite the economy starting to take an uptick, and there are efforts to bring these shut-ins back into society. 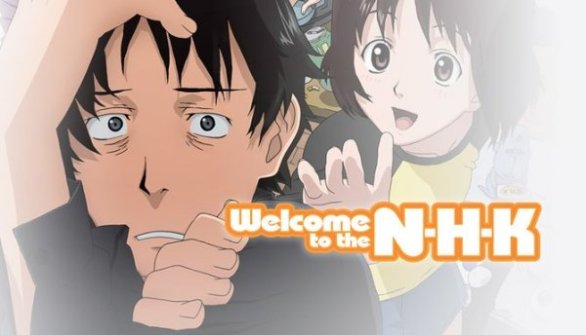 A good anime to show the struggle and mindset of the Otaku NEET/hikikomori is the underappreciated title Welcome to the NHK.  (Jason’s note: You can watch the series on free Crunchyroll streaming now.)  In this anime, Tatsuhiro Satou is a hikikomori who’s been holed up in his apartment for more than two years.  He dropped out of college after being disillusioned with his education and hearing the rumors some people in the neighborhood spread about him … or at least what he thought he heard them say.  His parents support him by sending him money, but he must lie to them about his lifestyle.

He cannot bear the shame he must be to his parents by being a hikikomori.  However, he receives a glimmer of hope from a girl named Misaki, who wants to help him out of being a shut-in.  Along the way, he re-unites with Kaoru, an old friend from high school.

As Satou works with Misaki to recover from his hikikomori ways, he must face the anxiety and pressure he had been ignoring for two years.  He deals with the crippling fear of interacting with others, and his own sheltered mindset.  He wants everything in the world to be perfect and fine, where nothing bad can happen to him, but reality just doesn’t work that way.  His mind and spirit are fragile.  It was shattered once already, and his effort to work with Misaki is like trying to hold together a broken vase with scotch tape. 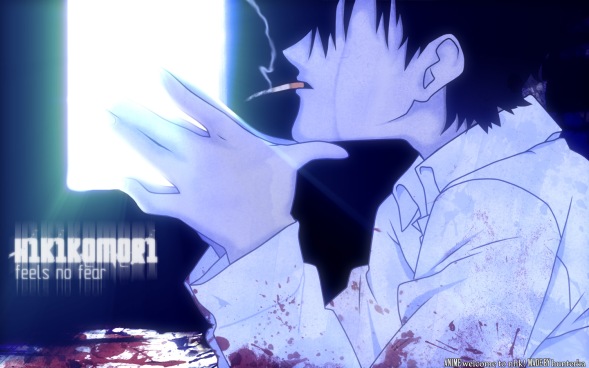 However, one should not look down on these shut-ins and NEET.  They tried just as hard as everyone else.  They just didn’t make it.  The society of the post-bubble still made it possible for anyone to achieve their goals.  The only difference is that those opportunities are located on a mountain and you have to fight, claw, and step on other people in order to get it.  This hyper-competitive environment was something that developed when the post-bubble generation.

In the most recent years, this world of competition has only become more competitive as a new generation comes of age.  This is the generation born after the burst of Japan’s economic bubble.  This generation is what some in Japan have been called the “Enlightened Generation.”  Unlike the Post-Bubble generation, which knew what life was like before the burst, this generation was born with no knowledge of “the good ol’ days.”  Yet, they still struggle with the same difficulties of the post-bubble, if not more so.  However, that is changing as the generations age, and what was once impossible at one point has now become possible.

If you could Re:Start at a point in your life and fix the mistakes you may have made, would you?  In my final article for the semester, I’ll talk about the Enlightened Generation and their take on the world.