It’s a liiiiiittle past midnight as I’m writing this post here at Otaku Ohana Mobile HQ, a room here at the Ala Moana Hotel with a lovely view of the yacht harbor between the Hawaii Prince Hotel and another building, the name of which I wouldn’t be able to tell you without Googling it first.

Yup. It’s definitely Kawaii Kon time again. Here’s my traditional Day 0 “look at how many people who preregistered and showed up to pick up their badges on Thursday!” picture. 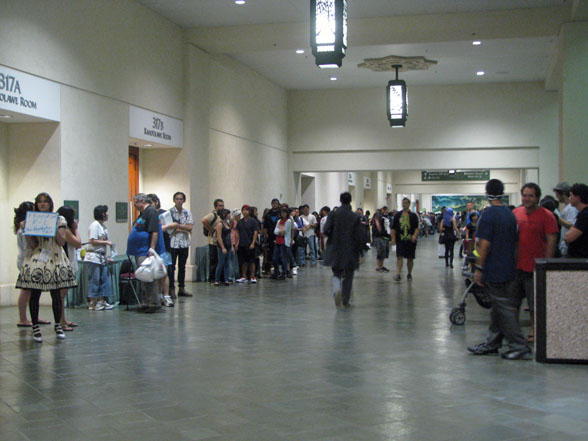 And here’s my usual “Yay! I have my credentials! MY EXISTENCE IS VALIDATED” picture of what my press badge this year looks like. 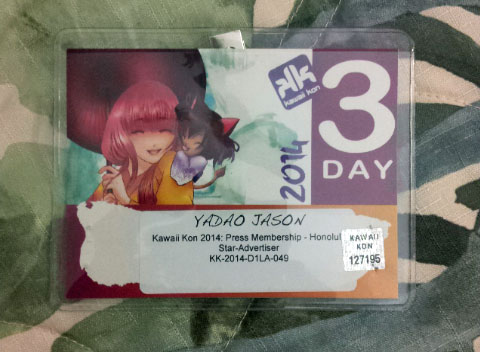 But seeing as how I took a look back at Kawaii Kon #1 in 2005 in my last post, I thought it would be fun to look at the convention program from Kawaii Kon #10 to see just how much things have changed from then to now. The proper answer, of course, is “a lot.”

Here’s the cover of this year’s program, full-color and glossy. 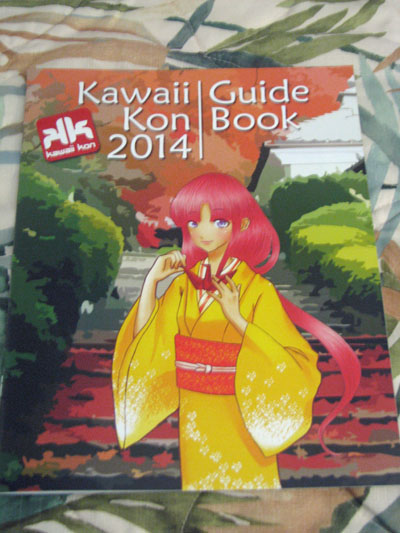 Here’s are two pages of the guest list. Not shown but also in the program: no one, because these are all the guests that are at this year’s show. 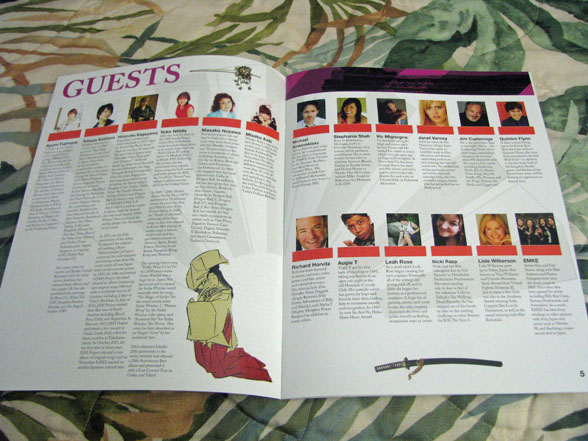 Here’s the con’s full schedule of events for Friday, Saturday and Sunday… not counting the video screenings, which are on a second two-page spread. Each page of this year’s program measures 8-1/2-by-11 inches, which means this year’s schedule would have taken up half of the 2005 program. 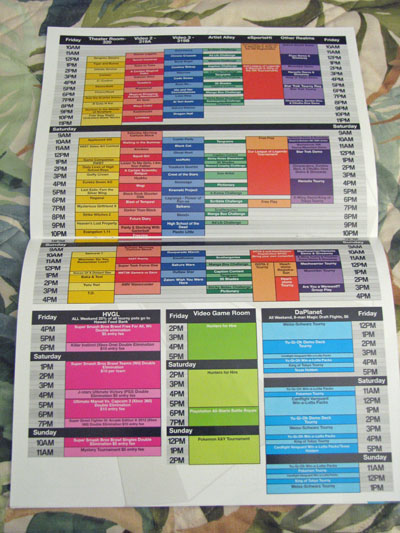 And for fun? Here’s are this year’s maps of where everything is located in the Convention Center and in the newly expanded, ground-floored Artist Alley/Dealers Room exhibit hall. 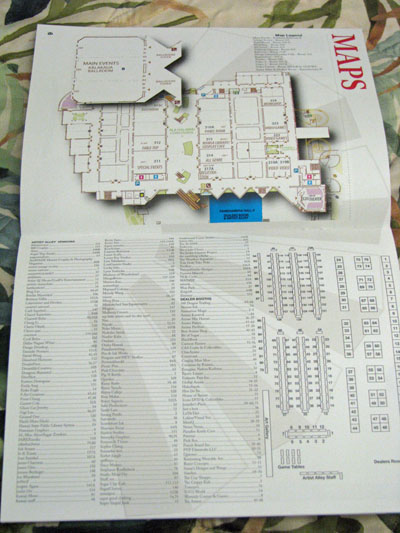 If I’m already achy from walking all around Ala Moana Center and to and from the Convention Center, you can pretty much guarantee that my legs will fall off by the time Kawaii Kon is over. Yes, kids, getting older is as awful as they say.

Some other con-related news of note coming in to Otaku Ohana Mobile HQ:

When last we left our intrepid Hachi Maru Hachi creative team of Jordan Takemoto, Rose Dela Cruz, Brady Evans and Tara Tamayori back in March, the talents behind the local manga anthology were getting ready to release their second issue at Kawaii Kon and pondering the possibilities for a third issue for next year.

Well, we’ve reached the “open solicitation” phase of the creative process … and if you or any local artist-types you know want to be part of that next issue, now’s your chance. Tara — she of “Eternal Blade” and that series’ perverted panda — posted the following today on the Hachi Maru Hachi Facebook page:

Hey all! Tara of “Eternal Blade” here! We are looking for people interested in doing their own manga and getting it published. All that is required is for you to have some sort of relation to the islands of Hawaii and have confidence that your work is ready to get out there.

We won’t just take anyone. Make sure to contact our president, Jordan Takemoto, with a 20-24 max page, one-shot story with character designs and concept, background, and fashion. We also want some inking examples of your work (if it’s digital that is fine), color is optional, and method of work (traditional/digital/both). Be ready and persevere against our strict president because he will poke holes in your story until there are none. If you are in younger than 18 make sure you let us know and have the consent of your parents. We do not wish to pull you away from school work. ((((；ﾟДﾟ)))))))

This is a lot of work but we hope you can contact us with all of this by the end of this month (or a little later since i posted this late). That way there is room to get this printed by February and sold at the Kawaii Kon in March. Good luck! Or がんばって‼ (((o(*ﾟ▽ﾟ*)o)))

For optimal effect, please press “play” on this video and let the audio play as you read through this post. (Please note, this should only be done in your personal space or with headphones.)

So. Kawaii Kon. Those of you who preregistered can pick up your passes at the convention center from 7 to 10 p.m. today; the convention itself runs from Friday through Sunday; and then you won’t have to read about it again here until some point in the future when there’s either a con-related announcement or your friendly neighborhood tag team in fandom, Wilma J. and/or myself, get around to writing about this year’s con experiences, whichever comes first. (We’re really hoping for the latter, but considering I’m usually exhausted by the end of the weekend and poor Wilma is also caught up in the whirlwind that is wedding planning, all bets are off at this point.)

There are far more stories to tell going in to Kawaii Kon than I have time to write up. One of them, about the three-year journey between the first and second issues of local manga anthology Hachi Maru Hachi and the creative talents behind its revival — Jordan Takemoto, Tara Tamayori, Rose Dela Cruz and Brady Evans — is in today’s paper. (For those of you checking out Otaku Ohana for the first time from that article, welcome! Here’s hoping I can update this blog enough times in the future to hold your interest and keep you reading it.) You can get what Brady, Pen & Ink Works, idkwhat2wear, Jon Murakami and the Hawaii State Library people have planned for the convention in that preview, too.

But there were other things that I just didn’t have the place or the space to properly fit into the preview. News stories are by their nature evolutionary creatures, the final product sometimes bearing little to no resemblance to the original idea. So there are fragments lingering with no real place to go, like these comments from one of this weekend’s guests, voice actor Todd Haberkorn:

— Fresh sushi
— Fans at the con that I haven’t seen before! Fans have expressed their interest in wanting to meet me face to face one day and I’m glad that is finally getting to happen.
— Swimming with sea life — Sharks! Dolphins! I’ve got my chain mail ready to go and partly, its an excuse to get to enjoy the beautiful, crystal clear blue waters of Hawaii!
— Fresh coconut juice — Not coconut milk, juice! I was a fan of coconut juice before it was hip! And to get it from one of coconut’s HQs is gonna be rad.

And here’s a comment from Johnny Yong Bosch, answering the same question of what he’s looking forward to:

This time around we didn’t get a chance to extend our stay, but a stop at the beach is mandatory. I don’t recall the name of the pancake place we stopped at, but we’ll have to make a trip there again. … The Hawaiian fans are very generous and supportive, we’ve made a few friends for life there.

There was also something Tara said during our recent interview that I thought was cute, so I’m including it here. Those of you who are either artists in Artist Alley or who have to tend to some kind of table during the convention will probably be able to relate to what she said when I asked about their con experiences every year:

I’m just stuck at my table. Like a mushroom. Slaving away, cutting out, laminating, coloring … everything I should have done beforehand.

So here we are, on the brink of the ninth annual edition of what’s become the premier celebration of the local anime and manga fan community. While there may be a bit of last-minute flailing around as everyone gets ready and gets settled, it’s shaping up to be a fun weekend — albeit a bit wet, if the weather forecasts hold true.

As promised, here are a few more of those last-minute tidbits that have gotten my attention over the past few days:

Internet connection willing, I’ll try to update this blog throughout the weekend. Follow me on Twitter, too, at @jsyadao, if that’s your social media cup of tea. Here we go!