We’re more than halfway in the news cycle for the new kid on the local anime convention block, Oni-Con Hawaii — a little over five months since they formally announced they were a thing, about 3-1/2 months before the inaugural edition kicks off at the Hawai’i Convention Center.

The news has dripped out since then. It took 1-1/2 months from their initial announcement to announce their dates (Nov. 1-3, for the record). We’ve also learned that Nobuo Uematsu and his band, Earthbound Papas, are guests, as is Atelier Pierrot designer Yuko Ashizawa. Cosplay Chess Hawaii and Yu x Me Maid Cafe & Host Club are hosting events. Registration for general attendees, vendor booths and The Alley (the show’s Artist Alley) opened, as did volunteer recruiting efforts for Team O.H.A.Y.O. (that’s the Oni-Con Hawaii All Y’all Ohana, a reflection of the con’s Texas-Hawaii roots, pardner).

And that’s been pretty much it … until late Thursday night, when a pair of guest announcements made its way to Oni-Con Hawaii’s Facebook page.

Making (as far as I can tell) his first appearance at any U.S. anime convention will be Japanese voice actor Hiroki Takahashi, the voice of Ryu in the newer Capcom fighters (Street Fighter IV, Street Fighter X Tekken, Tatsunoko vs. Capcom, Marvel vs. Capcom 3). Fangirls have swooned over him as the voice of Eiji Kikumaru in The Prince of Tennis and Japan in Hetalia: Axis Powers; his other major roles include Kenji Harima in School Rumble and Hisoka in Hunter X Hunter.

Joining Takahashi will be Sana, the visual kei musician who will be making his second visit to Hawaii in two years following his appearance at HEXXP last year. As I’ve mentioned before, he continues to be the guitarist for Kain, former guitarist for Mask and someone who still doesn’t have much English-language material written about him. I did record that joint panel he did with Kazuki Yao (though lord knows when I’ll actually get around to doing a transcript of that);  here’s a picture of him as proof. 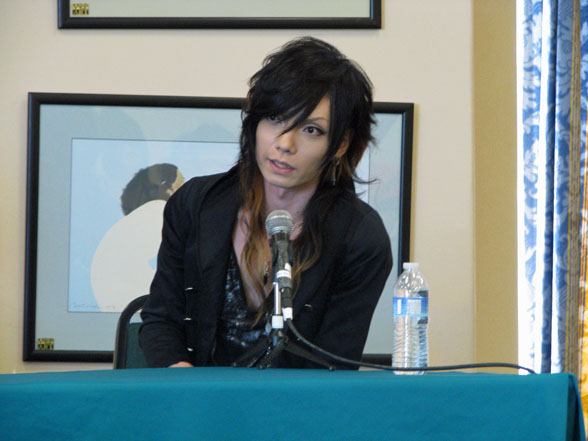 More news likely will come as we barrel ahead toward November. Preregistration rates currently stand at $45 for a three-day pass; if you’re an active member of the military and have the ID to prove it, you can snag a pass for $30. Visit www.oniconhawaii.com.