It’s been a while since tag-team partner in fandom Wilma J. has raved to me about wanting to see any anime, so when she does, you bet I’m going to perk up and take notice.

In this particular case, it’s Anohana: The Flower We Saw That Day, an 11-episode series that aired in Japan in 2011 and is currently available for free on Crunchyroll. In the series, a girl’s death ends up being the wedge that drives a group of childhood friends apart, but her ghostly return — and her haunting of the group’s leader — could end up being the key to them coming to terms over the guilt they felt about that tragic day. And a flower is probably involved. (Hey, I only saw the first episode of Kill La Kill on Wednesday. I have a lot of anime series catching-up to do.)

A feature-length film retelling the story was released in Japan in August; a few months later, in November, Aniplex of America announced it would be bringing the film to U.S. theaters, with Eleven Arts distributing. If you remember my first post on Evangelion 3.0 a few weeks ago, your sixth sense should be tingling right about now, considering that I said that pretty much anything with Eleven Arts attached to it has shown up locally as of late.

Well, an Aniplex press release announcing that a theater list was now available rattled into my inbox this morning … and there’s good and bad news. The good news is that the Anohana movie is, indeed, coming to Hawaii. The bad news? As of now, if you’re reading this somewhere that isn’t Maui, it’s going to cost you, at a bare minimum, round-trip airfare, a round-trip cab ride and a ticket to see it. That’s because, for the first time that I can remember this happening in all my years on this beat, Anohana is skipping Honolulu entirely and screening exclusively at the Kaahumanu 6 theaters in Kahului.

So here’s the deal, Mauians: There will be two showings, one at 2 p.m. on Wed., Jan. 22, the other at 7 p.m. Sat., Jan. 25. Fandango ticket links are embedded in that last sentence; tickets cost $15 each. Ticketholders will have an opportunity to score cool gifts, including “Letters From Menma” replicas and movie posters. And in case you’re still on the fence, here, have a trailer.

For more information on the movie, visit www.AniplexUSA.com/anohanamovie. In the meantime, I’ll be sitting over here, alternating between being jealous of those of you on Maui and seriously contemplating whether I should hop over for a day and indulge in Komoda Store cream puffs, guri guri from the Tasaka shop, and pretty much everything Sam Sato’s in Wailuku serves up. That’s good eatin’.

Those screenings are more than two weeks earlier than the Doris Duke Theatre screenings at the Honolulu Museum of Art that I’ve written about before, so if you’re really itching to see Eva 3.0 sooner rather than later, here’s your chance. If not, tickets are still available for all those screenings. As far as I know, tickets are also still available for the Kawaii Kon screening at 7:30 p.m. Thurs., Jan. 30, for free to those who have a three-day badge from 2013 or who already preregistered for 2014. Details for that offer are in this post.

Unless some major news breaks in the next few days, I expect this will be the last Ota-cool Incoming! update for 2013. It’s been a very fruitful year for the local anime/manga fan community … and the first few months of 2014 are already shaping up to be fun ones as well. So let’s get to it!

Honolulu Gift Fair: We already knew that Stacey Hayashi, author of the 100th Battalion/442nd Regimental Combat Team graphic novel Journey of Heroes, would be one of the vendors in attendance. Now comes word that she’ll have copies of the fresh-off-the-press second printing of the book as well. The new edition contains four additional pages — featuring letters from veterans and a list of donors to schools — and a redesigned cover. Well, okay, so the title bar just changed from red to blue, as you can see in the picture to the right. But hey, it’s something. Stacey will also have shirts featuring the chibis and buttons available for sale as well. Admission is free. Blaisdell Exhibition Hall; 3-9 p.m. Friday, 9 a.m.-9 p.m. Saturday and 9 a.m.-5 p.m. Sunday.

Aiea Library Anime Club: This month, librarian Diane Masaki is screening … well … something holiday-themed, that’s for sure. Could be polar bears. Could be something about three homeless friends and an abandoned baby. Just show up and act pleasantly surprised, okay? At the library, 99-143 Moanalua Road. For more information or to RSVP, call 483-7333 or e-mail aiealibraryanimeclub@yahoo.com. 3 p.m. Saturday.

MangaBento: This group of anime- and manga-inspired artists usually meets every second and fourth Sunday of the month at the Honolulu Museum of Art School (1111 Victoria St., room 200). Visit www.manga-bento.com. Next meeting: 1 to 4 p.m. Sunday.

New Year’s Ohana Festival: Kick off 2014 with the Japanese Cultural Center of Hawaii in an event guaranteed to be filled with food, games, entertainment, cultural activities and a Kawaii Kon booth, where preregistrations will be taken and Eva 3.0 tickets will be given away. At the center (2454 S. Beretania St.) and nearby Moiliili Field. Jan. 19, 10 a.m.-4 p.m.

Honolulu Festival: It’s the 20th anniversary edition of the festival promoting harmony between Hawaii and the Asia-Pacific region; the theme: “Jubilation, One Heart, One Pacific, One World.” Just as in previous years, Kawaii Kon will have an exhibit, and the Nagaoka Fireworks display will put a bow on the proceedings. Hawai’i Convention Center and other venues around Waikiki, March 7-9.

Next time in Otaku Ohana 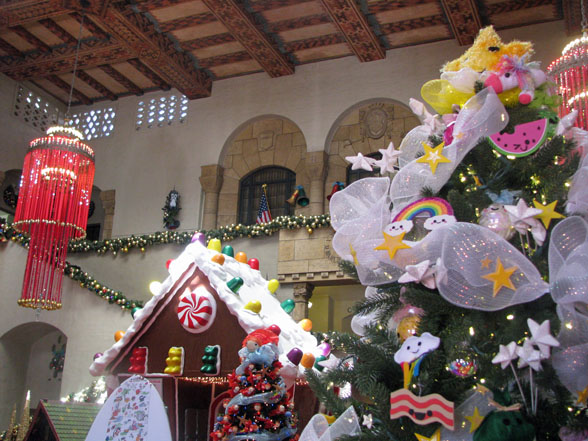 And there are a lot more pictures from where that came from, too.

One thought on ““Anohana”: The flower we’re seeing on Maui”