As I’m writing this in the early, holy-cats-I-remember-staying-up-this-late-when-I-was-working-for-the-Star-Advertiser hours of Friday morning, we’re a few hours away from the kickoff to Kawaii Kon 2018.

But while I’m thinking about that — and the fact that this is the earliest in the year that I’ve ever had to think about Kawaii Kon in my 14 years of covering the con, and I feel so unprepared — there are a few other pieces of news about upcoming events that have crossed my radar. Half of them are happening this weekend, and all of them deal with video games.

I’d be remiss if I didn’t mention that Hitbox Music Ensemble and director Chris Suzuki — the focus of what ended up being my last Kawaii Kon preview at the Star-Advertiser, *sniffle* — will be playing in the Main Events hall, Ballroom B, at 8:45 p.m. Friday. This year’s concert, “And All That Jazz…,” will feature video game music arranged in various styles including swing, big band, funk, soul, and, of course, jazz.  Here, for instance, is some rehearsal footage of “Floral Fury” from Cuphead.

If you like what you hear — or if you just like supporting local music in general — you should also consider throwing a few dollars in the direction of the group’s Patreon page. There’s currently … wait, only one supporter so far? And it’s not me? Well, I should get on that sometime soon. And you should, too.

One of the showcase events Kawaii Kon is promoting this year is also video game related. “A New World: Intimate music from Final Fantasy” brings conductor Eric Roth, composer Hitoishi Sakimoto (who composed the soundtracks for Final Fantasy Tactics and Final Fantasy XII, but is also responsible for the game soundtracks for classics as diverse as Radiant Silvergun, the Ogre Battle/Tactics Ogre franchise, Gradius V and the Valkyria Chronicles games), and the New World Players chamber ensemble to Honolulu for the first time There’s a VIP meet-and-greet experience for $75 starting at 3:30 p.m. Sunday that includes an autograph and photo op with Sakimoto and first dibs on concert seating; if you just want to attend the concert, it’ll only cost $12, with seating at 4:30 p.m. Sunday in Main Events, Ballroom B. (These costs are in addition to the cost for con admission.)

But let’s say you’re into another classic Square Enix franchise, Kingdom Hearts, the Disney/Square crossover adventure with the convoluted timeline that no one can properly explain without a big mess of flowcharts. Kingdom Hearts III is coming out … umm … eventually, but (possibly) before that happens, Honolulu is going to be a stop on the Kingdom Hearts Orchestra World Tour. It seems like if you’re familiar with orchestral performances like the two Zelda: Symphony of the Goddesses shows that played in Honolulu, you’ll know what to expect from this show: familiar songs from various games’ soundtracks played by an orchestra while game footage is shown on a giant screen. You know, like this. 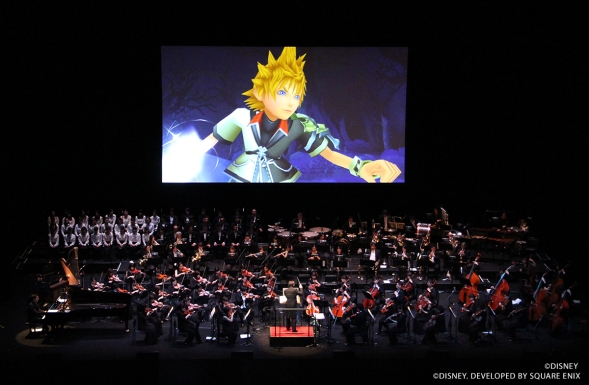 If you’re interested in going, you have some time to plan; the concert’s scheduled for Sunday, Aug. 12, with tickets going on sale Monday, March 26.

Finally, if music isn’t your thing and you’ve somehow made it this far into this post, something really interesting seems to be cooking over at Bread & Butter, the restaurant next door to Shokudo at 1585 Kapiolani Blvd.: Pac-Man. A few days ago, friend of the blog Tara Tamayori posted a picture of this menu from what appears to be a pop-up themed cafe:

It looks like there are some of the usual crossovers — pancakes, pizza (thankfully without a wedge missing), and generally round Pac-Man-ish foods come to mind — as well as some interesting concepts (a ghost loco moco? Hmm…). The most intriguing take-away from this menu, though? The fact that there’s a Pac-Store opening somewhere at some point during this campaign, which runs through May 31, with “fashion, goods, food and events.” More details as they develop, but this looks like it’s going to be fun.